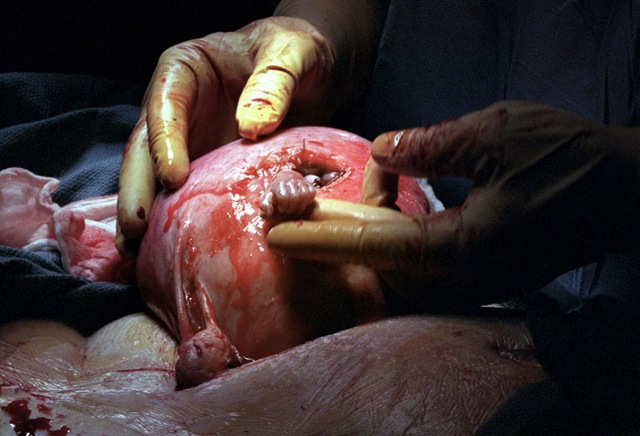 I’m posting this just in case there is someone out there who has never seen it, what a powerful photo with those precious little fingers…

“This photo was taken during a surgery performed by Dr. Joseph Bruner and Dr. Noel Tulipan at the Vanderbilt University Medical Center, Nashville on August 19, 1999 to treat a 21-week-old fetus for spina bifida. The operation was a success, and three months later a healthy Samuel Alexander Armas was delivered by C-section.”

From the photographer, Michael Clancy:

“Out of the corner of my eye I saw the uterus shake, but no one’s hands were near it. It was shaking from within. Suddenly, an entire arm thrust out of the opening, then pulled back until just a little hand was showing. The doctor reached over and lifted the hand, which reacted and squeezed the doctor’s finger. As if testing for strength, the doctor shook the tiny fist. Samuel held firm. I took the picture! Wow! It happened so fast that the nurse standing next to me asked, “What happened?” “The child reached out,” I said. “Oh. They do that all the time,” she responded.”     Source.