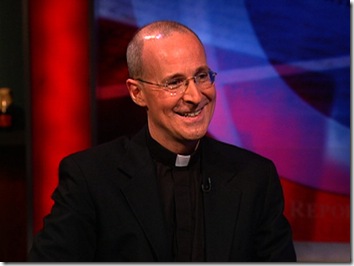 My friend Karen sent me this story which is on Fr. James Martin’s Facebook page, and I thought you might enjoy it…

I’m writing this column using voice-activated software. Sitting in front of a computer, I am speaking into a microphone and watching the words almost magically appear before me on the screen. Believe it or not, after just 15 minutes of training, the program understands my Philadelphia accent well enough to transcribe words like liturgical, St. Ignatius Loyola and even post Vatican II without a hitch.

In fact, it’s so good at recognizing theological and ecclesiastical words that I wonder if the program wasn’t pre-tested by Yves Congar, John Courtney Murray and Henri de Lubac. (Well, it’s not totally flawless. Yves Congar keeps coming up as Yukon guard.)

The reason for this technological innovation is that I recently met with a minor accident. Last week I fell over a misplaced piece of furniture in my bedroom in the middle of the night and, half asleep, broke my fall with my hands. A taxicab ride later, I was in a hospital emergency room. And soon afterwards the pain suddenly intensified.

After examining me and taking some X-rays, a kind young doctor told me she would have to put my right arm in a cast. I don’t think I heard her clearly; I was too focused on the pain. “But to do that,” she said with an uncomfortable look on her face, “we’ll have to bend your wrist back slightly.” She then asked another doctor into the room. “Uh oh,” I thought, “this doesn’t look good.”

It wasn’t. When she bent my hand back, I actually screamed. And three things ran through my mind simultaneously.

First: I can’t believe how painful this is! They had already given me morphine, which proved largely useless. I thought back to all of those wartime movies where the hero is injured, cries out for morphine and is instantly comforted when the needle pierces his uniform. Were they giving me generic morphine?

Second: What is this, the Civil War? They were bending my wrist backwards? No doubt they explained this medieval technique, but I was in no state to listen. The doctor-supervised wrist-wrenching needed to last long enough for the cast to harden; it felt like an hour, though it probably lasted only a minute. I would have made a lousy martyr and a worse spy, I realized, ready to give up all information at the first sign of pain.

Third: Jesus was human. The pain was focused, laser-like, on the inside of my wrist. Now I’m something of a historical Jesus fan, and so I knew that he was most likely nailed to the cross at this spot: through the wrist, not the palm.

When we think of Jesus’ humanity, we are often grateful that he became one of us, walked among us and showed us the human face of God. But it wasn’t until that evening in the emergency room, half-asleep, doped up on morphine and in pain, that I think I began to understand the enormity of what Jesus took on. Every kind of human pain he willingly accepted. And that means not simply the terrible pain of crucifixion but the everyday aches and pains that are our lot as human beings: head colds, stomach flu’s, insomnia, conjunctivitis, migraines, hives, toothaches, back pains—all the physical things that happen in human life from time to time. Somehow this made me feel more compassion for him, and love him even more.

Anyway, it’s not so bad. It turned out just to be a tiny fracture, and my splint gets me lots of sympathy. And I guess I’ve learned something new about Jesus, which is always a good thing.

“Wouldn’t you have preferred to learn it from a book?” a friend asked.

Probably. But I probably wouldn’t have understood it. Experience, as we know from Jesus, counts.

Also, here’s a good video from Fr. James Martin, “Who Cares About the Saints?”