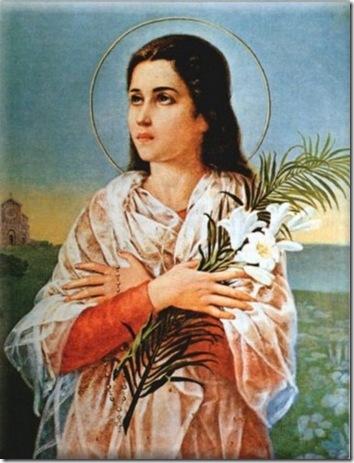 The story of Saint Maria Goretti is such a moving and beautiful example of forgiveness that it will not leave you, but it didn’t totally rock my world until I saw this show on EWTN one afternoon, a one-man drama on the life of Alessandro, the man who murdered Maria after trying to rape her.

(Unfortunately I can’t find a preview online, but it is available for purchase here.  It may be aired on EWTN again in June or July, before St. Maria’s feast day on July 6th.  Here’s another version, a full movie online, but it’s no where near as well done.)

Alessandro stabbed Maria 14 times because she wouldn’t give in to his attack, and as she lay in the hospital, she forgave him before she died. Alessandro was captured and sentenced to thirty years. He was unrepentant until he had a dream that he was in a garden. Maria was there and gave him flowers. When he woke, he was a changed man, repenting of his crime and living a reformed life. When he was released after 27 years he went directly to Maria’s mother to beg her forgiveness. This is the part that blew me away. When she opened the door and saw him, she hugged him and said, “If Maria can forgive you on her death bed, then I can do no less.”

When Maria was canonized a Saint in 1950, both her mother and Alessandro were present!