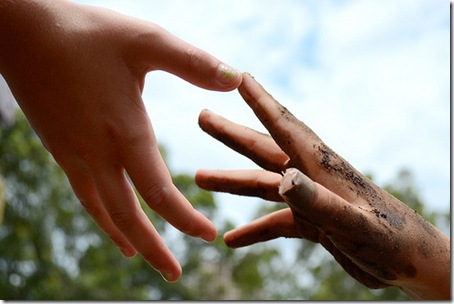 Last year was the most stressful year of my life.  (You may have already heard me whine about this on my Kitchen Kop blog, but hang with me, there’s a reason I’m whining again!)  I was developing my entire Real Food for Rookies online class from scratch, and this included not just researching, organizing, writing and polishing all the content, but also building the websites for the selling page, where the content would sit, where the membership information would sit, and also the forum.  I’m SO not technically gifted and didn’t have a CLUE how to do any of that.  This is all from a person who just wants to research and write posts, which I was also trying to fit in.  Figuring it all out and finding the time to pull it together was the hardest thing I’ve ever done.

In the midst of all that I was feeling like a rotten Mom & wife, because when there’s so much on your plate, something has to give, and usually family suffers.

I also was feeling guilty that I wasn’t in a position to “do” much for God.  Especially since my conversion I’ve loved helping others however I could, by volunteering at Church, being involved in this or that ministry, and feeling that I am making a difference for His people in some way.  But at certain times in your life, you just can’t do all that you want to and I had to say “no” to many things.  (Not a bad word to learn anyway, for those of us who easily find ourselves over-committing, more on that below.)

But I learned something neat throughout all this…

Even in the nuttiest times in your life, God will show you that there are still ways you can help others!

Here’s how He did that for me…

Last year our third grade daughter (who I’ll call “K”) became friends with a special needs boy at school (who I’ll call “B” for privacy reasons) who has a serious and life threatening illness.  I’d known his Mom for a while but not well. When I saw her in the hall on the day of the kids’ Christmas parties I said, “I’ve been wanting to talk to you, K has been asking if she can have B over!  Can I call you to find a time?”  She said sure and told me later that she was so excited and hoped I’d really call, because he’s never been invited for a play date before.  This so shocked and saddened me, that people would keep B at arms length like that.  I still don’t really understand it, especially now that we’ve gotten to know him more – he is the most lovable kid!  I’m only his good friend’s Mom, but when he sees me he throws his arms around me and says, “I love you”!  His Mom has now become a close friend, and when I finally convinced her to let us have him for a sleepover, that he would be fine and that I’d sleep right with them (and finally let her get a night of sleep), she cried, because he has wished and wished that he’d someday get to have a sleepover at a friend’s house.  When he was in the hospital a few times last year, it felt so right to make extra of what we were having and take their family meals.

The point to all this is something that came to me as I was delivering one of those meals last year, and the reality of it, of how GOOD God is to us, hit me so hard that it brought tears to my eyes:

He always gives us the grace and the means to help others, no matter our situation, wherever we’re at in life!

Having B over for play dates or sleepovers, taking their family meals, it all worked in my life.  It wasn’t a burden in the least on my already crazy schedule.  His Mom often went on and on about how grateful she was that K befriended B, but I tried to get her to understand that K loves their friendship too, it’s a mutually beautiful relationship and blessing in OUR lives.  The fact that she and I have also become good friends is an extra gift.  Especially at one particularly stressful moment last year when she was truly a Godsend as she listened to me bawl in her ear over something no where near as serious as what she’s faced with daily, yet she gave me great advice that I needed to hear:  give it to God, trust Him, she’s had to learn that one over and over.

Another neat note to share on this whole story is that God does the same for B’s Mom.

She’s dealing with a seriously ill child, yet still constantly takes meals to others in need.  She’s told me often, “There’s not a lot I can do for others right now, but I can cook and I can take people meals.”

Even when things aren’t as crazy around here as they were last year, I’m still learning that it’s OK to say no.  What may be one person’s passion and their ministry may not be yours.  I often quote Max Lucado (in one of his books, can’t remember which) when he said, “If you want to know God’s will for your life, follow your passion.”  That is now how I figure out what it is that the Lord wants me to say yes to, and what He’d like me to say “NO” to, and of course lots of prayer and some common sense are thrown in there, too.  I may be passionate about something but know in my heart that now isn’t the time to take on something new.  I remind myself that we won’t always have four kids at home with us, and I’ll have plenty of time to follow more of my passions later.  For now I will put my family first, as I know for sure that I’m called to be a good Mom and to be grateful for these treasures in my life who, along with my husband, are my biggest passion of all.  🙂